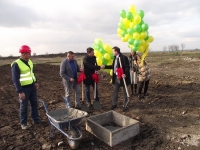 Today’s ceremony of laying the foundation stone marked the beginning of construction of the factory for vegetable production and processing.

It is 8 million euros investment of the Italian company "La Linea Verde",and the factory in Dobrinci shall provide work for 150 people.

The foundation stone has been laid by Branislav Ignjatovic,the general director of the company "La Linea Verde", in Serbia, Slađan Mančić, the president of the Municipality of Ruma and Dragan Stevanović, the State Secretary in the Ministry of Commerce. The president of the Municipality of Ruma, Slađan Mančić emphasized that the local self government traces the course of the Government of the Republic of Serbia, that enabled making of the positive climate, the arrival of the investors, as well as opening of new workplaces. "It is important that 150 people from Dobrinci and surrounding villages will be employed , and that pleases us most. However, the importance of this investment reflects in the fact that it shall enable small agricultural households to become partners with this company and to gain revenue through products from greenhouses and in other way. At this moment, Ruma is a huge building site. “Aside the construction of this factory, the building of four production plants is at the advanced stage", said the president Mančić and also added that the Municipality of Ruma does not make a difference between a town and a village, meaning that it equally invests into development of the whole municipality.

The commercial director of "La Linea Verde" the company in Serbia, Đoko Đokić mentions that within the new facility, the production in Dobrinci shall be carried out according to the lastest standards of European Union, applying the cutting edge techologies, giving a completely safe and healthy product.

The factory in Dobinci shall stretch on approximately 5.600 meters square, and it shall produce salads as meals and washed lettuce ready for consumation.

The Municipality of Ruma has a support from the Rebublic and Provincial Government, and as estimated by Dragan Stevanović , the State Secretary in the Ministry of Commerce, and Damir Zobenica, the deputy president of AP Vojvodina Assembly, that support is absolutely deserved.

"Within the present term of office of the Prime Minister Aleksandar Vučić, the municipality of Ruma has become the most attractive invesment zone in Serbia. My each visit to Ruma for the past two or three years has included laying a foundation stone ceremony , cutting the ribbon and the commence of the work of factories. Politics of the Government of the Republic in Serbia , here in Ruma, is on the level of self government, and that is something to be congratulated on. Speaking in numbers, since 2013. Ruma has had an inflow of 35 million euros. Within that amount of money, the share od the Ministry is 9 million euros, which contributed to the opening of about 1.100 working places", said Stevanović and pointed out that the Ministry shall carry on to support financially infrastructural equipping of working zones in Ruma.

Big and important agricultural investment like the "La Linea Verde" company is more than welcome to Serbia, emphasized Nenad Katanić, deputy of Ministry of agriculture and environmental protection.

"If united, our agriculturers can become more competent on a local, European and world market. By involving our people into cooperative relationship, with a safe price and a reliable contract, this investment will have a long term positive influence on olericulture”, said Katanić. The commence of the work of the factory in Dobrinci is expected next year in spring. It is planned to lift greenhouses around the factory, on a surface of about 20 hectares. 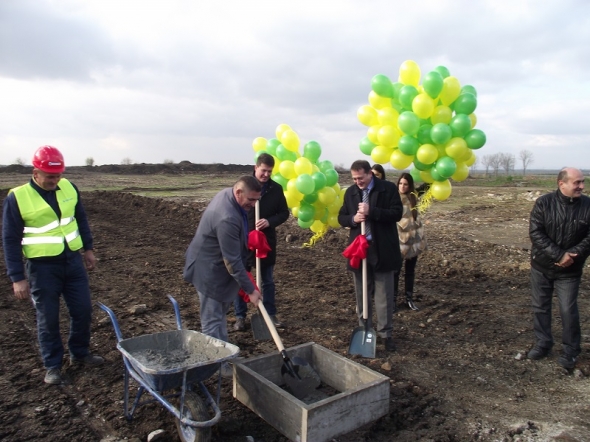