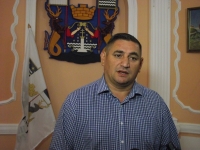 Last week, in the German town Bonnthe president of the Municipality of Ruma, Slađan Mančić, presented the local administration of Ruma, within the pilot project “Communal partnership for the sustainable development” . The project is conducted by the Federal Ministry of Commerce that deals with various approaches towards achieving 17 global goals of the sustainable development on the local level. This includes a quality health car, renewable energy, gender equality, reducing disparities, etc.

The project brings together local communities from Germany, Eastern and Southeastern European countries.

Ruma was among 20 Southeast European cities that were present there, and a considerable tribute goes to the Major of the Bersenbrick, dr Horst Bayer, due to whose initiative the Federal Ministry for Commerce and Development sent us a letter of intent. Just to remind, the cooperation between Ruma and Bersenbrick was established on the ground of various levels, last year. The result were several mutual visits and the initiation for fraternization of these two towns.

The cooperation of two towns was recognized on the highest level, so the invitation for taking part in the project “Communal partnership for the Sustainable Development” came to Ruma as well.

At the meetig in Bonn Ruma presented The Strategy for Sustainable Development of Ruma from 2015-2020. Together with its partner town in Germany, Ruma considered options for creation of a project that would be the most appropriate to apply with for funds awarding.

"We decided to apply with the project for the protection of natural environment and dealing with issues concerning local lanfills, i.e. dump sites, which is, together with the problems of heating system , one of the two major issues we face in our municipality.After a two-day meeting in Bonn we visited our partner cities. We held a meeting with eminent people in the city, on the very first day, and we all agreed that the protection of the environment is an important topic for both towns.

On the same day, the Major Bayer sent the project proposal to the Ministry of Economic Cooperation and Development ,by an email, which was very well accepted in Germany, because the deadline for the project submission is 17. October, and we have almost the finished project", said the president of Ruma, Slađan Mančić.

The project would be financed from the EU pre-accession funds, World Bank, or other sources.

The further stay in Bersenbrich was carried on in the manner concering fraternization procedures.

"Germany has a lot more complicated procedure than we have. We agreed that it would be good to exchange delegation of politicians, which means that the Assembly board members from their town shall visit our. The agreement on fraternization is bound to be signed right after that, in January or in spring”, said Mančić.

The first man of the local self government thinks that the fraternization would have great effects on Ruma, because Bersenbrick is in the German Federal state Lower Saxony with 8 million inhabitants and with a lots of potential investors.

"We showed our great potentials, first of all in the industrial zones, and the Major dr Bayer has already invited local Commerce chambers and industrial parks to think about the possibility of investing in Ruma. The arrival of only one investor from the Lower Saxony would definitely attract other investors from that area”, Mančić pointed out.