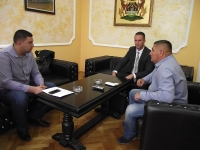 The Provincial Secretary for regional development, international cooperation and local self government Ognjen Bjelić, has visited Ruma today. He has been hosted at the City House by the president of the Municipality of Ruma Slađan Mančić and the head of the department for local economic development Dragan Kosanović.

The topic of the meeting were foreign investments, local economic development, but the major topic was the creation of the projects from the sphere of economy, business and communal infrastructure, for which purpose the Secretariat shall offer their assistance and shall be the mediator when applying for Eu funds. 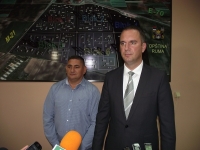 "We turn to external sources of financing and we start to work intensely on the project proposals for EU funds. Our goal is that every municipality prepares 10 project proposals during the following year, and to apply for different funding. A provincial Secretariat shall co-finance a lots of activities, but still we need to create a habit within the local self governments to work on the project writing. A number of project proposals have already been prepared, some of which are related to the cross-border cooperation. Therefore we are optimistic when Ruma is concerned, said the provincial Secretary Bjelić",

The presidentof the municipality of Ruma, Slađan Mančić has expressed readiness of the Administrative department to meet the task and announced that Ruma has got the potential to prepare more than 10 project proposals. "That would not present a problem for us because we already have dozen of prepared project. Three or four projects are from the area od social protection, two are related to health care, and some are about infrastructure in the working zones, meaning that the Local economic department is ready for the task. Cooperation with Croatia, BiH, i.e. with the Serb Republic has already been established and our plan is to put a joint effort into devoting to topics related to the environment protection and the waste disposal,as the president Mančić pointed out.

After the meeting, the first man of Ruma municipality turned to the announced transfer decline for the next year, acoording to which the local self governments shall be allocated 3% less revenue from tax and income, on a monthly base.

"It is not about the drastic transfer reduction, especially for the municipalities with a stable fiscal politics and budget liquidity. Some municipalities will definitely feel the considerable reduction, but we are ready to compensate that with opening of new work places. With the existing interest amog investors, and with the posiibility of employing, we are able to compensate for the decrease of funds", Mančić concluded.