A new factory, "Hutchinson" from Ruma, supplies world's giants of the automobile industry

Factory of hoses for the air-conditioning devices which is in the ownership of the French giant Hutchinson, started its work today in Ruma. The factory which will supply the automobile industry with its products and will hire 200 employees, was inaugurated in the presence of Aleksandar Vučić, the Premier of Serbia. In the last year, 3 factories were inaugurated in the presence of Aleksandar Vučić, who used this opportunity to give his praise to the hard-working representatives of the local self-government, for being able to overcome 500, 600 millions of dept and make Ruma one of the most attractive locations for foreign investors in the whole Serbia.

The Premier pointed out that it was not easy to to convince "Huthinson" to come to Serbia, given that they were considering Macedonia, Bulgaria and Turkey and that their arrival to our country is a great political victory of the Government of Serbia. This is the first investment of "Huthinson" in Serbia estimated at around 7,3 million of euros.

The Premier expressed his satisfaction over the fact that local self-governments in Srem are competing to attract investors, with the comment that Srem can serve as an example to other regions.

He mentioned that the Government invested 1,9 million of euros of incentives, while the local self-government gave land and access roads, pointing out that this exactly is the job of the Government. " We are happy that 200 people will get a job, I think that there may even be 300 people, and there are talks to produce fuel hoses in this plant, which will provide for 400 new employees. "

Vučić pointed out that according to the data from the National Employment Service of Serbia and in the period from January, 2014 to the end of 2015, Ruma has reduced the number of 1400 unemployed people which is a big success for that municipality.

As President of the Municipality of Ruma considers, today's inauguration of a new factory is the crown of responsible and good work as well as support of the Government of Serbia and the Premier Vučić.

"We have shown that such a big investment can be implemented in such a short period of time. The most important fact are the new jobs, as we have promised employment in the realistic, economy sector. All the investors who have opened their factories recently are already considering the extension of their production, and given that the business climate is very favourable and that the local self-government is fulfilling the needs of all the investors, I am convinced that the citizens of the Municipality of Ruma are to expect a more prosperous future. In addition to this, the President Mančić said that the Nepalese investor "Cinnovation Group" is soon to start the construction of their new factory and that there are expressed interests of some domestic investors and that the Industrial zone "Rumska Petlja" is a possible location where the biggest South-east European cold-store could be built.

The President of the Municipal Assembly and the Member of the Parliament of the Republic of Serbia, Aleksandar Martinović pointed out that this is a big day for the Municipality of Ruma and a good message to all the citizens of our country how important is the cooperation between the private sector, local self-government and the Republic of Serbia.

"As the Premier has already said, the Municipality has , so to say, "removed" 1400 people from the National Employment of Serbia. Our Municipality obeys the Public sector employment ban which makes it clear that the citizens of the Municipality of Ruma are employed in the private sector. We will continue this politics in the future. We have modern work zones which are communally equipped, municipal management and public entrprises which have proven again that working permits and other necessary acts can be issued in the record deadline. This is recognised and appreciated by the Investors which is why we have new investment interests in the Municipality of Ruma", pointed out Martinovic, adding that the local self-government managed to raise the Municipality of Ruma from the economic bottom to being one of the most economically successful municipalities in Vojvodina, maybe even in the entire Serbia.

At today's inauguration, the Premier thanked the Ambassador of France, Christine Moro for her support, pointing out at the same time that opening of this factory can represent a renaissance of trading relations between France and Serbia. "I hope that the trading exchange in the next two year will reach a billion of euros", said Vučić. Franch Ambassador Moro said that, at the moment, there are around 100 French companies doing business in Serbia and employing around 10.000 employees, and that economy cooperation will be intensified in the upcoming years.

Director of "Hutchinson" Olivie Sato, considers that Ruma is an extremely attractive location for investment given its geographical position, and that the local self-government is putting maximal effort and dedication to opening new work places.

"Hutchinson" from Ruma will supply some of the reknown producers such as "Mercedes", "Fiat", Suzuki" and "Reno".

As it was announced before, there is a plan to export products to Germany, Hungaria, Italy and Russia and the factory management pointed out that besides its favourable geostrategic position, this part of Serbia has a quality work force as well. 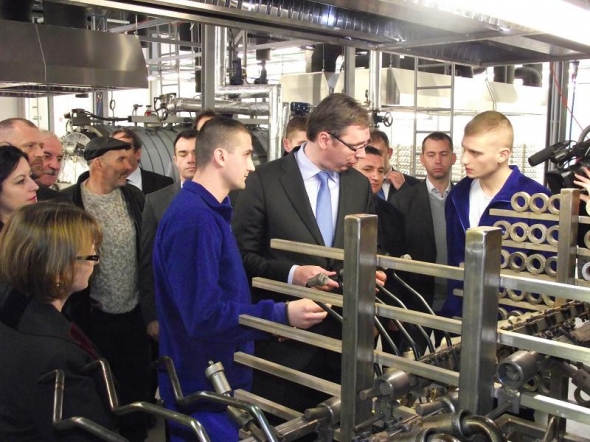