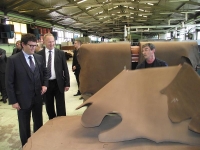 Thanks to the sale of the leather factory in Ruma to the "Kering Group", the best known global brands when it comes to the fashion industry, will soon use the final products made of bovine leather, manufactured in the popular factory "Kožara", from Ruma.

Today, the Minister of Finance and Economy Mladjan Dinkić has signed the contract on incentives on direct investments for this company with the executive manager of the "Kering Group" Jean Francois Pal, who plans to invest six million euros in Ruma . "Kering Group" will restore production of luxury leather accessories brands, and for each newly employed person, the Serbian government, , is determined to subsidy 8,000 euros, through the program of financial support.

"Kering Group" bought the property from the Leather Factory in Ruma and established a joint venture company called "Luxury tannery" , which holds the majority stake, in order to be able to continue with its activities related to leather manufacture,

"Luxury tannery " will employ 120 workers, i.e. all workers who are already working there (currently 115 people are employed).

Minister of Finance and Economy Mladjan Dinkić said that that investment was equal to the arrival of Fiat in Kragujevac.

"There is no stronger company in the world of leather industry than "Kering". That's why it is a great satisfaction that they come to Ruma and invest a lot in this drive. The leather factory in Ruma has received the best possible partner, because the Government of the Republic of Serbia supported this investment. The names and brands: Gucci , Puma , Saint Laurent   are the brands that we will work for from today in Ruma, speak for themselves. Also, I must say that the company "Kering " anticipated investments in environmental protection. For the first time in this factory the wastewater treatment facility will be built. With the arrival of this investor we will strengthen the image of our Municipality. Ruma has become a more attractive place for investors recently, and many are showing their interest in the same, so I congratulate the leadership of Ruma Municipality, " said the Minister Dinkić.

The executive Manager of the "Kering Group" Jean-Francois Pal believes that the factory in Ruma is crucial in strategic terms, and in terms of the essential raw materials for production.

The Municipality of Ruma has no direct stake, given that a private company had been sold. However, the benefits of arrival of the "Kering Group" will have the effect on the whole Municipality, as the first man of the local government Goran Vuković, states.

"This is an important day for our community. The day when a large company, a world renowned one , has started production in Ruma. Its annual turnover of around 10 billion euros, which is almost a third of the gross product of Serbia, which speaks of the importance of the company. I hope that this group will be satisfied with the operations in Ruma and of course opt for some additional investment. We shall show them that as a municipality we can be the best possible partner. "

"Kering group" made ​​a five-year work plan. Exports in the coming year should be 14,5 million euros, while for example in 2018 exports projected at 21.5 million euros. "Kering group" is present in more than 120 countries. In 2012 they achieved a turnover of 9,7 billion Euros and has 33,000 employees. The Ruma Leather Factory works with 20 percent of its capacity.

The former manager of "Tannery" Jovica Vulin, states that "Kering Group" is one of the most serious investors that has come in Serbia.

"The factory itself carries on with the production, and all the workers will get a permanent job. I believe that the beginning of the next week will be followed by the innovations, as I was told yesterday.The production itself is 90 percent based  on domestic raw skin, which is so far exported. The brand as Gucci , which now owns 51 percent of the factory, should not call into question the future functioning of the same. I am sure that the workers and their families have a reason to be satisfied with this kind of outcome, because" Kering group" has big plans.